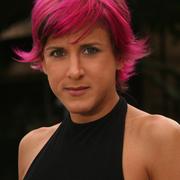 by Drago Bonacich Born in the U.S. but raised in Brazil, Cris Delano began singing in a children's chorus before becoming a backup vocalist for local numbers. In 1999, she published a book called Mais Nunca E Preciso Cantar (More Than Ever Is Necessary to Sing). Delano made her debut with Em Tom Maior, a tribute to local star Tom Jobim. The album was produced in 2000 by composer/arranger Roberto Menescal, founder of Brazilian label Albatroz. The independent Filha Da Pátria followed in 2001.

You Rise Me Up - Cris Delanno