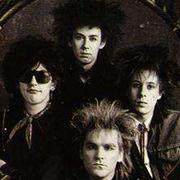 by  Steve HueyWith idealistic spirit, a powerhouse live show, and bigger than big hair, the Alarm were part of an early-80s wave of bands (the Call, Big Country, and the Waterboys among them) who dealt in soaring anthems inspired by the righteous idealism of punk. Clearly influenced by the impassioned political fervor of the Clash, the Alarm also worked in a mostly acoustic, folk-punk vein that provided a counterpoint to their hard-driving guitar rockers. Their stage look was unquestionably a product of the 80s, with enormous spiked-up hair accompanying a cowboy/old-time cavalry wardrobe. Yet the numerous comparisons to U2 in the press were not unfounded; despite a more conservative sonic palette, the Alarm had much the same earnest intensity, the same messianic ambitions, even the same vague spirituality. Likewise, the Alarm seemed to covet a mainstream breakthrough in the vein of The Joshua Trees conquest of the pop charts, and polished up their sound accordingly, with mixed creative results. The British music press habitually savaged their records as derivative and pretentious, but this meant little to their zealous following who supported the band to the tune of over 5 million sales worldwide and 16 Top 50 UK singles.The Alarm was formed in Rhyl, Wales in 1981 by vocalist/guitarist Mike Peters, whod started out in a local punk band called the Toilets along with Alarm drummer Nigel Twist (b. Nigel Buckle). When that band broke up, Peters — then playing bass — formed a new outfit called Seventeen (after the Sex Pistols song) with guitarists Eddie MacDonald and Dave Sharp (b. Dave Kitchingman), both local scenesters and longtime friends. Seventeen was initially influenced by the Pistols, the Clash, the mod-revival punk of the Jam, and the punk-pop of ex-Pistol Glen Matlocks Rich Kids. As their songwriting interests grew more socially conscious, and in early 1981, the group reinvented itself as the Alarm, taking the name from a Seventeen song called Alarm Alarm. Later that year, they moved to London and self-released their debut single, a Peters/MacDonald-penned political rocker called Unsafe Building, backed with Sharps folk-punk tune Up for Murder. By this time, MacDonald and Peters had switched instruments, with Peters taking up rhythm guitar and MacDonald moving to bass.In 1982, the Alarm signed with IRS and issued another single, Marching On. On the strength of their live shows, U2 tapped them to open their 1983 supporting tour for War, which helped make the groups next single, the Stephen King retelling The Stand, into an underground hit. The Alarms self-titled debut EP appeared later in 1983, compiling previous single releases, and setting the stage for the release of their first proper album, Declaration, in 1984. A Top Ten U.K. hit, Declaration spun off several popular singles, including the Seventeen holdover Sixty-Eight Guns (which made the pop Top 20), Where Were You Hiding When the Storm Broke? (which just missed), The Deceiver, and the live staple Blaze of Glory. Non-LP singles followed in a cover of The Bells of Rhymney, the new wave dance tune The Chant (Has Just Begun), and the British Top 40 hit Absolute Reality.The Alarms sophomore effort, 1985s Strength, was another U.K. success, and brought them into the Top 40 of the U.S. album charts for the first time; additionally, the single Spirit of 76 was a Top 40 U.K. hit. Strength displayed greater subtlety and maturity in both their songwriting and arrangements, and was often hailed as the groups best overall album. The Alarm took a break after the supporting tour, and returned in 1987 with Eye of the Hurricane, which featured more polished, mainstream production reminiscent of U2. The gambit helped them gain some rock radio play in America with the singles Presence of Love, Rescue Me, and especially the more danceable Rain in the Summertime, and they landed a tour slot supporting Bob Dylan. A concert EP, Electric Folklore: Live, followed in 1988.1989s Change was an homage to the groups native Wales, and was accompanied by an alternate Welsh-language version, Newid. Produced by Tony Visconti, Change spawned the groups biggest modern rock radio hit in America, the bluesy Sold Me Down the River, which also put them in the U.S. pop Top 50 for the first and only time. Devolution Working Man Blues and Love Dont Come Easy also earned radio airplay, and the track A New South Wales boasted an appearance by the Welsh Symphony Orchestra. Although it was hugely popular in Wales, it didnt sell as well as the groups earlier works, and internal band dissension — exacerbated by deaths in both Peters and Twists families — made 1991s Raw the original Alarms final effort. The Road was their final radio hit, but with the bands impending breakup, IRS found little reason to promote it.Mike Peters and Dave Sharp both embarked on solo careers. Sharp issued albums in 1991 and, after relocating to New Orleans, in 1996. Peters, meanwhile, issued his solo debut in 1995 and was subsequently diagnosed with lymphoma; fortunately, the cancer turned out to be benign, and Peters completed two more solo records before forming Colorsound with former Cult guitarist Billy Duffy. Peters subsequently reunited the original Alarm lineup for several live appearances, and then formed a new unit consisting of guitarist James Stevenson (Gene Loves Jezebel, Chelsea), bassist Craig Adams (the Cult, the Mission UK, Sisters of Mercy), and drummer Steve Grantley (Stiff Little Fingers). In February 2004, this lineup of the Alarm pulled off a masterful hoax on the British music industry by issuing a garagey punk-pop single, 45 RPM, under the fictitious name the Poppy Fields. Peters, having gotten positive feedback on the song, decided to disassociate it from his veteran band to have it judged on its own merits, and recruited a young Welsh group called the Wayriders to lip-sync the song in the video. The so-called Poppy Fields took 45 RPM into the U.K. Top 30 before the hoax was revealed, setting the stage for the new Alarms first album together, In the Poppy Fields. Soon after the albums release, production for a film based on Peters manipulating of the music industry began with Shrek producer John H. Williams backing the project.

Make You Mine - PUBLIC