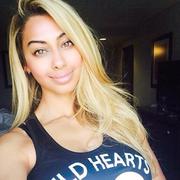 onna Rele is a London based singer-songwriter whose musical influences point to a wise head on young shoulders - Stevie Wonder, Chaka Khan and the Beatles sit alongside NeYo, Brandy, Robert Glasper, Adele and The Weekend; with the influence of her parents, both professional musicians, never far from the surface. Sonna describes her sound as "stripped back acoustic-based songs merged with the subtle sound and pulse of a club mix underneath it".  As a Londoner, Sonna adores the city and its culture. “I travel and spend a lot of time away from home, but nothing beats a good cup of tea"! Sonna also admits to keeping a book of quotes from people she meets. “Some people keep autograph books but I collect quotes, I’ve got thousands. I am constantly blessed in meeting some very amazing people that say the most profound or funny things, so I keep my quote book for posterity and inspiration", smiles Sonna.